Besides glucose, glutamine has been also shown to be a precursor of citrate by reductive carboxylation pathway acting in counter-Krebs cycle direction (Yoo et al, 2008). In this project we focus on specific features of glutamine mitochondrial pathway in cancer cells that depends on the activity of isocitrate dehydrogenase 2 (IDH2), NADPH-dependent enzyme of mitochondrial matrix. We test various cancer cell lines to utilization of glutamine in reductive carboxylation pathway, and endeavor to emphasize its role in cancer biology.  So far, we have confirmed reductive carboxylation flux by GC-MS studies, as 13C from 13C-glutamine is incorporated into cell metabolites including citrate in tested cancer cell lines. We shall further investigate changes in mitochondrial matrix redox state as a consequence of IDH2 expression and activity as the reaction of IDH2 is accompanied by NADPH oxidation. 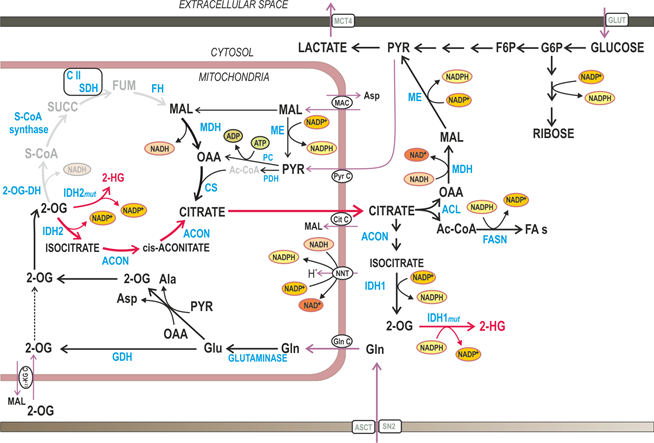 The mitochondria are the main cellular sensor of oxygen in the cell. In the low oxygen environment, the cells are forced to adjust their energy metabolism. Thus cells cultivated in glucose switch from mitochondrial production of ATP to metabolism of glycolysis with enhanced lactate production. This change is initiated on the transcriptional level by means of HIF1 transcription factor. We have found that the change of energy metabolism is accompanied by changes of mitochondrial reticulum morphology. Using super-resolution fluorescent microscopy (BiPLANE) in our department in cooperation with electron microscopy lab (Dr. Malínský, IEM) we study changes of mitochondrial morphology on the level of inner, outer membrane and cristae morphology in relation to cellular metabolism during hypoxic adaptation.