Mitochondrial network and mtDNA organization, and genetic manipulations of mtDNA

Mitochondria are semiautonomous organelles bearing own mtDNA assembled into nucleoprotein complexes called mitochondrial nucleoids. Besides, mitochondria contain also its own apparatus of gene expression. We are interested in biology of mitochondrial nucleoids, its dynamics, distribution, size, replication and interaction with other proteins. To study this, we employ several approaches of high-resolution microscopy, i.e. FPALM (Fluorescence PhotoActivation Localization Microscopy) in combination with dSTORM (direct Stochastic Optical Reconstruction Microscopy); on the other hand also SIM (Structured Illumination Microscopy) and STED (STimulated Emission Depletion) microscopy. Interesting fact remains that even during short induction (ectopic expression) of nucleoid protein expression leads to increased size of nucleoids and impaired segregation. Best way for two-color imaging by FPALM seems to be overexpression of nucleoid protein in combination with immunocytochemistry. In case of anti-DNA antibody the average size of mitochondrial nucleoid is approximately 80 nm. It is fascinating that in this space you can find 16.6 thousands base pairs long DNA packed together with DNA binding proteins, proteins for DNA replication/transcription, as well as proteins of DNA repair. Part of this project is also investigation of life cycle of mitochondrial ribosomes, biogenesis of which occurs in the vicinity of mitochondrial nucleoids and ends up possibly by mitophagy.

Fluorescence in situ hybridization (FISH) of mitochondrial DNA and RNA

FISH is a research method allowing the sequence-specific visualization of the distribution of particular RNAs and DNAs in the cells using short DNA probes labeled with fluorescent molecules. Our laboratory is developing and adjusting FISH methods for super-resolution FPALM microscopy of mitochondrial nucleic acids. It will enable us to study distribution and kinetics of particular species of RNA in the mitochondrial reticulum and to describe the ultrastructure of mitochondrial chromosomes – nucleoids. This approach will represent an important milestone in the understanding of mitochondrial molecular genetics – probably the least understood branch of molecular biology, which has recently gained significant attention through its connection with cancer and aging research. 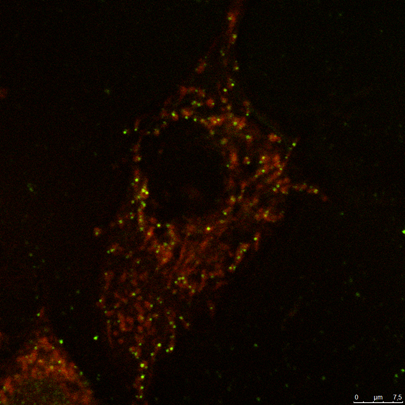