This review provides evidence for the importance of white and brown adipose tissue (i.e. WAT and BAT) function for the maintenance of healthy metabolic phenotype and its preservation in response to omega-3 polyunsaturated fatty acids (omega-3 PUFA), namely in the context of diseased states linked to aberrant accumulation of body fat, systemic low-grade inflammation, dyslipidemia and insulin resistance. More specifically, the review deals with (i) the concept of immunometabolism, i.e. how adipose-resident immune cells and adipocytes affect each other and define the immune-metabolic interface; and (ii) the characteristic features of "healthy adipocytes" in WAT, which are relatively small fat cells endowed with a high capacity for mitochondrial oxidative phosphorylation, triacylglycerol/fatty acid (TAG/FA) cycling and de novo lipogenesis (DNL). The intrinsic metabolic features of WAT and their flexible regulations, reflecting the presence of "healthy adipocytes", provide beneficial local and systemic effects, including (i) protection against in situ endoplasmic reticulum stress and related inflammatory response during activation of adipocyte lipolysis; (ii) prevention of ectopic fat accumulation and dyslipidemia caused by increased hepatic VLDL synthesis, as well as prevention of lipotoxic damage of insulin signaling in extra-adipose tissues; and also (iii) increased synthesis of anti-inflammatory and insulin-sensitizing lipid mediators with pro-resolving properties, including the branched fatty acid esters of hydroxy fatty acids (FAHFAs), also depending on the activity of DNL in WAT. The "healthy adipocytes" phenotype can be induced in WAT of obese mice in response to various stimuli including dietary omega-3 PUFA, especially when combined with moderate calorie restriction, and possibly also with other life style (e.g. physical activity) or pharmacological (e.g. thiazolidinediones) interventions. While omega-3 PUFA could exert beneficial systemic effects by improving immunometabolism of WAT without a concomitant induction of BAT, it is currently not clear whether the metabolic effects of the combined intervention using omega-3 PUFA and calorie restriction or thiazolidinediones depend also on the activation of BAT function and/or the induction of brite/beige adipocytes in WAT. It remains to be established why omega-3 PUFA intervention in type 2 diabetic subjects does not improve insulin sensitivity and glucose homeostasis despite inducing various anti-inflammatory mediators in WAT, including the recently discovered docosahexaenoyl esters of hydroxy linoleic acid, the lipokines from the FAHFA family, as well as several endocannabinoid-related anti-inflammatory lipids. To answer the question whether and to which extent omega-3 PUFA supplementation could promote the formation of "healthy adipocytes" in WAT of human subjects, namely in the obese insulin-resistant patients, represents a challenging task that is of great importance for the treatment of some serious non-communicable diseases. 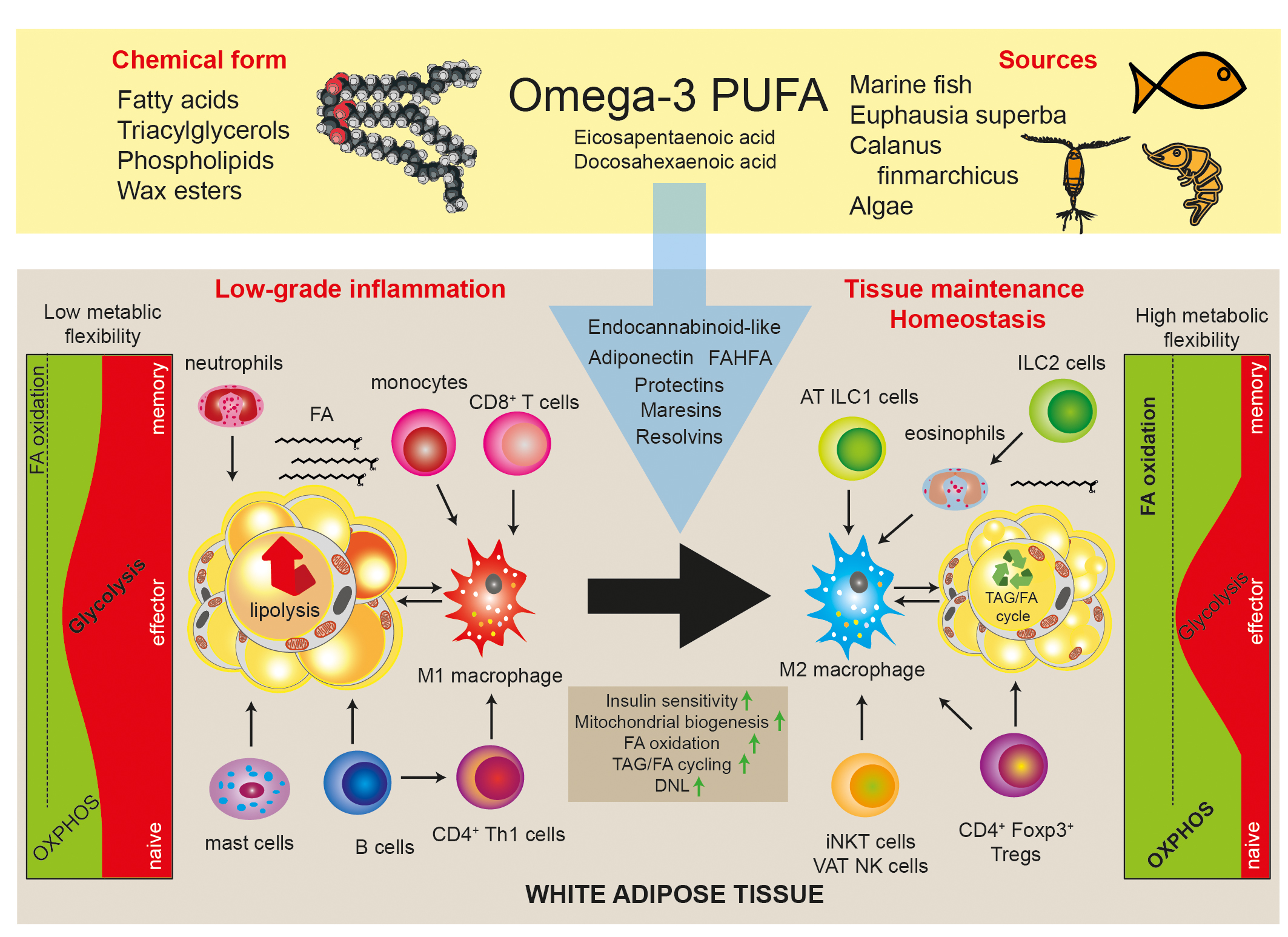 Scope Docosahexaenoic acid ester of hydroxy linoleic acid (DHAHLA) is a bioactive lipids with anti‐inflammatory properties from the family of fatty acid esters of hydroxy fatty acids (FAHFA). Methods and results To explore the biosynthesis of 13‐DHAHLA from dietary oils, C57BL/6N mice were gavaged for 8 days with various corn oil / marine oil mixtures containing the same amount of DHA. Plasma levels of omega‐3 FAHFAs were influenced by the lipid composition of the mixtures but did not reflect the changes in bioavailability of polyunsaturated fatty acids in plasma. Triacylglycerol‐bound DHA and linoleic acid served as more effective precursors for 13‐DHAHLA synthesis than DHA bound in phospholipids or wax esters. Both 13(S)‐ and 13(R)‐DHAHLA inhibited antigen and PGE2‐induced chemotaxis and degranulation of mast cells to a comparable extent and 13(S)‐DHAHLA was identified as the predominant isomer in mouse adipose tissue. Conclusion Here we identified the optimal nutritional source of DHA, which supports production of anti‐inflammatory FAHFAs, as triacylglycerol‐based marine oil and also revealed a possible role of triacylglycerols in the synthesis of FAHFA lipokines.

One of the DHA metabolites – polyunsaturated FAHFA 13-DHAHLA exerts anti-inflammatory effects of macrophages and mast cells [2, 3]. DHA-rich triacylglycerol-based marine oils are superior to marine phospholipids and wax esters in the ability to increase levels of 13-DHAHLA in circulation. Interestingly, the chemical form of the oil (lipid class) was more important that the fatty acid composition.

We have explored the omega-3 index in Czech population within a project QUALITAS - Wellbeing in health and disease (2015-2021). No difference between rural and urban population was observed, but low omega-3 index suggested that the consumption of marine fish or other omega-3 PUFA sources should be increased [4].

Naturally occurring long-chain omega-3 PUFA such as eicosapentaenoic acid (EPA; 20:5 ω-3) and docosahexaenoic acid (DHA; 22:6 ω-3) exert multiple effects on health, which are related to the intake of these lipids in the diet and correlate with the levels of omega-3 PUFA in the body. These levels are reflected by the omega-3 PUFA index, i.e. the EPA and DHA content as % of all fatty acids in red blood cells. The aim of this study was to evaluate omega-3 index in the Czech Republic, using blood samples collected from the capital city (n = 476) and the rural region (n = 388). The mean omega-3 index was 3.56 mol % with a maximal value of 8.10% and a minimal value of 1.12%. There was no difference in the index value between rural and urban / industrial regions, but this value was higher in subjects who reported eating fish or omega-3 PUFA supplements. In conclusion, the results indicated suboptimal values of the omega-3 index in the Czech population independent of the sampling region.

Leukotrienes (LTs) and sphingolipids are critical lipid mediators participating in numerous cellular signal transduction events and developing various disorders, such as bronchial hyperactivity leading to asthma. Enzymatic reactions initiating production of these lipid mediators involve 5-lipoxygenase (5-LO)-mediated conversion of arachidonic acid to LTs and serine palmitoyltransferase (SPT)-mediated de novo synthesis of sphingolipids. Previous studies have shown that endoplasmic reticulum membrane protein ORM1-like protein 3 (ORMDL3) inhibits the activity of SPT and subsequent sphingolipid synthesis. However, the role of ORMDL3 in the synthesis of LTs is not known. In this study, we used peritoneal-derived mast cells isolated from ORMDL3 KO or control mice and examined their calcium mobilization, degranulation, NF-κB inhibitor-α phosphorylation, and TNF-α production. We found that peritoneal-derived mast cells with ORMDL3 KO exhibited increased responsiveness to antigen. Detailed lipid analysis showed that compared with WT cells, ORMDL3-deficient cells exhibited not only enhanced production of sphingolipids but also of LT signaling mediators LTB4, 6t-LTB4, LTC4, LTB5, and 6t-LTB5. The crosstalk between ORMDL3 and 5-LO metabolic pathways was supported by the finding that endogenous ORMDL3 and 5-LO are localized in similar endoplasmic reticulum domains in human mast cells and that ORMDL3 physically interacts with 5-LO. Further experiments showed that 5-LO also interacts with the long-chain 1 and long-chain 2 subunits of SPT. In agreement with these findings, 5-LO knockdown increased ceramide levels, and silencing of SPTLC1 decreased arachidonic acid metabolism to LTs to levels observed upon 5-LO knockdown. These results demonstrate functional crosstalk between the LT and sphingolipid metabolic pathways, leading to the production of lipid signaling mediators.